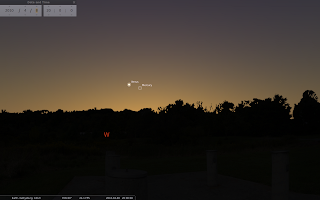 Venus and Mercury will appear together in the evening sky in late March and early April. Look very low in the west about 20 minutes after sunset. It’s a difficult sight, for which you’ll need clear skies and an unobstructed western horizon. Mercury is a greatest elongation on April 8 and will rapidly descend toward the sunset afterward. Venus, by contrast, will be setting later and later over the next few months. Image created by Stellarium. Local horizon panorama shows the Gettysburg College Observatory outdoor platform.