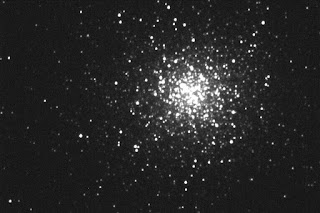 We got the CCD cameras out at our second session. Here are photos of M13 (globular cluster) and M27 (planetary nebula): 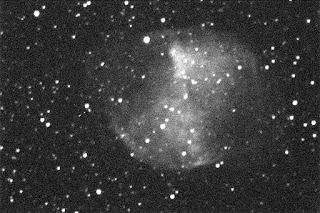 And finally, another shot of the Int’l Space Station. It’s the short trail; longer trail is an airplane. 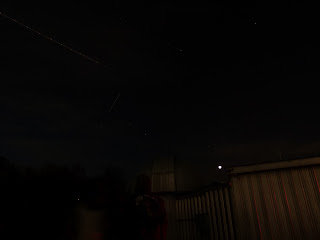 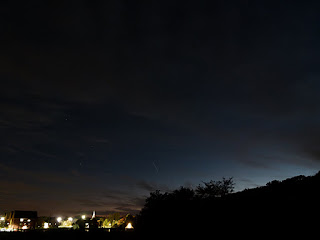 Here are some photos taken on and around the observing deck at our session Monday night. The first two show the International Space Station, which passed over just before our first session. First shot is of the ISS appearing and moving up in the southwest, the next is shows it at max altitude and brightness (mag -3.3). Both are 15 sec exposures. The last shows Jupiter rising over the GC Observatory. It’s a 30 sec exposure on an ordinary tripod with no tracking, so if you zoom in you can see that Jupiter and the stars moved during 30 seconds of the earth’s rotation! Note the Pleiades just to the right of the observatory dome. 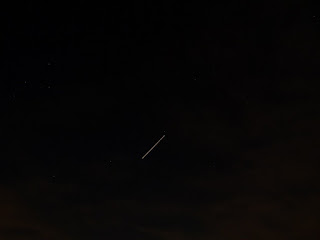 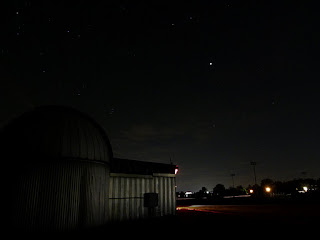 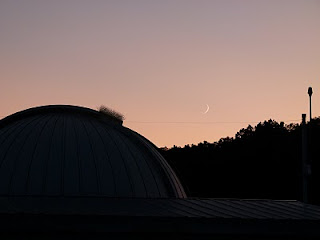 Here are some photos of the young (about 59 hours) waxing crescent moon I took outside the Gettysburg College Observatory 9/29/11 between 7:00 and 7:30 PM EDT, while waiting for students to arrive for an Astro 101 lab. 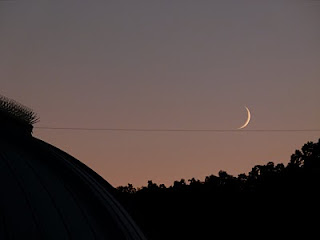 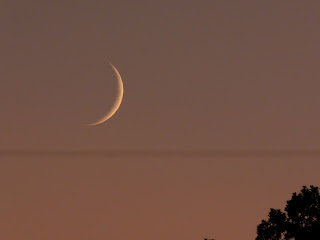 Our monthly skyshow series returns for the 2011-12 academic year this Sunday, Sept. 11, at 4 PM and Monday at noon. Full calendar is available on the planetarium web site. Topics will be the September skies as well as astronomy news, including the unusual supernova pictured here. 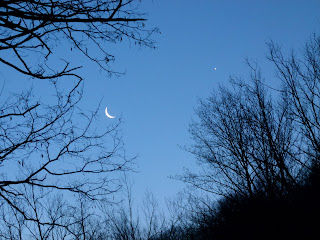 At left is a photo I took of the waning crescent moon and Venus at 6:16 AM on March 1. Upcoming moon-planet meetings include one with Jupiter tonight, visible if the clouds clear in time. In that case, it would be a waxing crescent moon in the west after sunset. Another moon-Venus morning conjunction will occur on March 31, a little lower in the east than the one pictured here.

Hear about these events and more at the Sky this Month shows today at 4:00 and tomorrow at noon.

Our goal is to do the “Sky this Month” shows on the first Sunday and Monday of the month, except where outside factors interfere. Since its move to February, we have learned not to fight the NFL Superbowl. That’s why there will be no show this Sunday, Feb. 6. Instead, the February sky-shows are Monday Feb. 7 at 12 noon and Sunday, February 13 at 4:00 PM. These shows, and the rest of the Spring 2011 schedule, can be found on the planetarium web site. 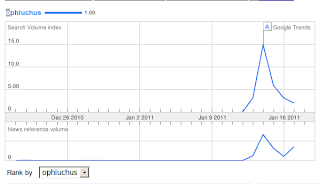 Here’s a Google Trends graph showing searches for “Ophiuchus” over the last 30 days. The spike comes after a Minnesota astronomy instructor, Parke Kunkle, mentioned in an interview that the sun glides through the constellations of the zodiac on a different schedule than it did a few thousand years ago, and therefore the dates for the zodiacal signs used in astrology no longer match up with the sun’s position. To add to the fun, he mentioned that, in addition to the famous twelve, the sun also passes through Ophiuchus, the serpent bearer. Chaos ensued.

As Kunkle knew, the shift he spoke of has been known for over 2,000 years. It is due to the Precession of the Equinoxes, the same wobble that means Polaris has not always been and will not always be our North Star. Precession is covered in most Astronomy 101 courses, including ours. Why this old news went viral would be an interesting question to explore some time.

Astrologers were quick to point out that they use a “Tropical Zodiac” anyway. In it the signs are merely seasonal markers, now independent of the constellations from which they originally drew their names. Not that I endorse the practice of astrology, but fair enough. As someone interested in sundials, I have seen the zodiacal signs used as seasonal markers in just this way.

Case closed? Hardly! It’s a great excuse to demonstrate the Precession of the Equinoxes and point out Ophiuchus at the 2011 New Year show this Sunday and Monday. (See the calendar on the planetarium site for more info.)

I’m now writing a monthly column on the night sky for the Gettysburg Times. Look for it on the third Monday of the month (starting today) in the “Living” section. (It’s not available on the web site, so far as I know). 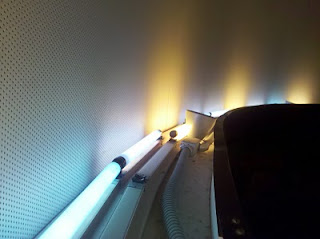 I haven’t posted here this fall, so perhaps an early New Year’s resolution is in order.

Today and tomorrow we present our final shows of the fall semester. We’ll be featuring some research news from the Gettysburg College Observatory as we’ll as a total lunar eclipse viewable from our region in the early AM hours of Dec 21. It’s the last favorable for eastern North America until 2015, so let’s hope it’s clear!

The Spring 2011 schedule is set and available at the planetarium (paper) and on the web site. In addition to the monthly skyshows, we’ll be doing the New Year show again, and in April something new: a solar system scale model made by taking a 1,000-yard walk.

SORRY!
We inadvertently scheduled shows over the Easter Break.